An audio of this sermon is available here.

9 As Jesus went on from there, He saw a man named Matthew sitting at the tax office, and He said to him, “Follow Me!” So he got up and followed Him.
10 While He was reclining at the table in the house, many tax collectors and sinners came as guests to eat with Jesus and His disciples. 11 When the Pharisees saw this, they asked His disciples, “Why does your Teacher eat with tax collectors and sinners?”
12 But when He heard this, He said, “Those who are well don’t need a doctor, but the sick do. 13 Go and learn what this means: ‘I desire mercy and not sacrifice.’ For I didn’t come to call the righteous, but sinners.” 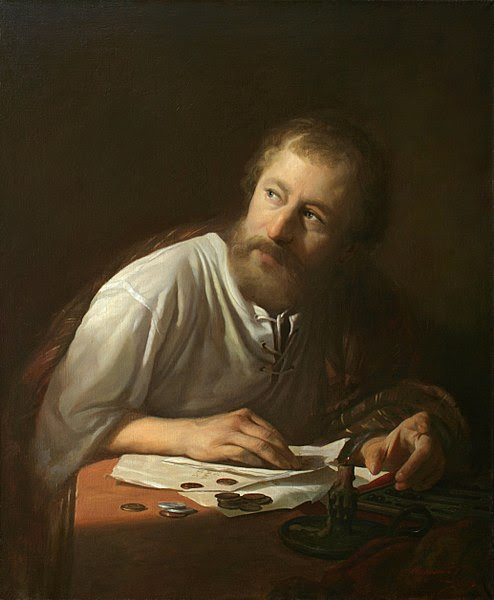 
Matthew’s gospel was probably published in the late 50’s or early 60’s of the first century AD, within thirty years of Jesus’ crucifixion in AD 33. Atheist Richard Dawkins claims that ‘Nobody knows who the four evangelists were, but they almost certainly never met Jesus.’[1] Concerning the New Testament gospels, Dawkins is sure that ‘not one of them’ was written ‘by an eyewitness.’[2] However, according to New Testament scholar Craig L. Blomberg: ‘a good case can still be made for Matthew, Mark, Luke, and John as the authors of the Gospels that have traditionally been attributed to them’.[3]

For example, despite being one of the twelve apostles, Matthew - ‘Levi son of Alphaeus’ (cf. Mark 2:13-17) - was hardly a leading figure, and he’d been a tax collector, which meant he’d collaborated with the pagan forces of the occupying Romans and had probably lined his own pockets in the process. By contrast, ‘the later second-through fifth-century apocryphal Gospels . . . are all (falsely) ascribed to highly reputable, influential early Christians to try to make them appear as authoritative and credible as possible.’[4]

New Testament scholar Timothy Paul Jones agrees the evidence suggests the source behind Matthew’s gospel was indeed ‘a tax collector named Matthew. . .’[5] Jones goes on to note that: ‘Tax collectors carried pinakes, hinged wooden tablets with beeswax coating on each panel. Tax collectors etched notes in the wax using styluses; these notes could be translated later and rewritten on papyrus.’[6] So, when Matthew’s gospel reports Jesus calling Matthew, when it describes Jesus ‘reclining at [Matthew’s] table’ with other ‘tax collectors and sinners’, and when it recounts Jesus’ sarcastic response to the disapproving Pharisees, we‘ve reason to believe we are in touch with an eye-witness report.

Jesus diagnoses humanity as suffering from a ruptured relationship with God. The presenting symptoms of this rupture are plain to the judgmental, pointing fingers of the Pharisees, displayed for all to see in the ‘tax collectors and sinners’ to whom Jesus daringly extends table fellowship. And the Pharisees are right. Matthew and his tax collecting friends had no pretension to being ‘holier than thou’. The ‘sinners’ reclining at the table with Jesus really were sinners. Indeed, the term translated as ‘sinners’ means people who openly impugn or neglect the Law, and as Matthew 21:31-32 indicates, that probably included prostitutes.

Yet the sinful neediness of these ‘tax collectors and sinners’ led them to accept the counter-cultural invitation to dinner with Rabbi Jesus. When we look deeper into Jesus’ habit of extending table-fellowship to social outcasts, we see that Jesus was foreshadowing the heavenly banquet at which he will dine in a radically inclusive fashion with followers from all the people-groups of the world. Blomberg explains:

one could speak of these meals as enacted prophecy or symbolic of the kingdom’s surprising inclusions. . . no one is saved apart from repentance and faith in Jesus. But precisely to enhance the possibilities of genuine repentance for those alienated by standard Jewish separationism, Jesus ‘mixes it up’ with the notorious and the riff-raff of his world. Scarcely fearing that he will be morally or ritually defiled by them, in many instances he winds up leading them to God and to true ceremonial and spiritual wholeness.[7]

The Pharisees don’t like Jesus’ inclusive approach to ‘sinners’, and that’s where they go wrong. The Pharisees do have pretensions of being ‘holier than thou’, pretensions that speak of the sinful pride at the heart of the ruptured relationship between man and God. That pride presents differently in the Pharisees than in the ‘tax collectors and sinners’, but there is it, hollowing out their ‘holier than thou’ religion. And so Jesus tells the Pharisees to reflect upon a quotation from the 8th century B.C. prophet Hosea, an appropriate source in the situation given that Hosea was commanded by God to marry a prostitute and to forgive her adultery. Here is Hosea 6:4-6 (NIV):

“What can I do with you, Ephraim?
What can I do with you, Judah?
Your love is like the morning mist,
like the early dew that disappears.
Therefore I cut you in pieces with my prophets,
I killed you with the words of my mouth—
then my judgments go forth like the sun.
For I desire mercy, not sacrifice,
and acknowledgment of God rather than burnt offerings.

Jesus wanted the Pharisees to see that going through the religious motions without the sort of loving acknowledgement of God that flows through your life as mercy or love for others – avails nothing. In other words, the Pharisees need to agree with G.K. Chesterton’s famous letter to the Times:

Dear Sir: Regarding your article ‘What's Wrong with the World?’ I am. Yours truly, G.K. Chesterton.

So, Jesus diagnoses the heart of the human problem as a problem of sinful pride that blocks relationship with God. His application of this diagnosis to religious people as well as to ‘tax collectors and sinners’ should drive us all to those opening words from the ‘Sermon on the mount’ in Matthew 5.

But what of Jesus’ self-understanding? Jesus clearly casts himself in the role of God. Jesus extends table fellowship to sinners as a parable of God’s kingdom in which he takes the role of host. Having described himself as ‘a doctor’ for ‘the sick’ who has ‘come to call . . . sinners’ into God’s kingdom, Jesus references Hosea (whose very name means ‘He saves’). Consider Hosea 6:1-3 (NIV):

Come, let us return to the Lord.
He has torn us to pieces
but he will heal us;
he has injured us
but he will bind up our wounds.
After two days he will revive us;
on the third day he will restore us,
that we may live in his presence.
Let us acknowledge the Lord;
let us press on to acknowledge him.
As surely as the sun rises,
he will appear;
he will come to us like the winter rains,
like the spring rains that water the earth.”

Thus the Son who would die and rise ‘on the third day’ announces he has come to ‘call sinners’ into his kingdom. Amen.