Now there was a man in Jerusalem, whose name was Simeon, and this man was righteous and devout, waiting for the consolation of Israel, and the Holy Spirit was upon him. And it had been revealed to him by the Holy Spirit that he would not see death before he had seen the Lord's Christ. And he came in the Spirit into the temple, and when the parents brought in the child Jesus, to do for him according to the custom of the Law, he took him up in his arms and blessed God and said,

“Lord, now you are letting your servant depart in peace,
according to your word;
for my eyes have seen your salvation
that you have prepared in the presence of all peoples,
a light for revelation to the Gentiles,
and for glory to your people Israel.”

And his father and his mother marveled at what was said about him. And Simeon blessed them and said to Mary his mother, “Behold, this child is appointed for the fall and rising of many in Israel, and for a sign that is opposed (and a sword will pierce through your own soul also), so that thoughts from many hearts may be revealed.” 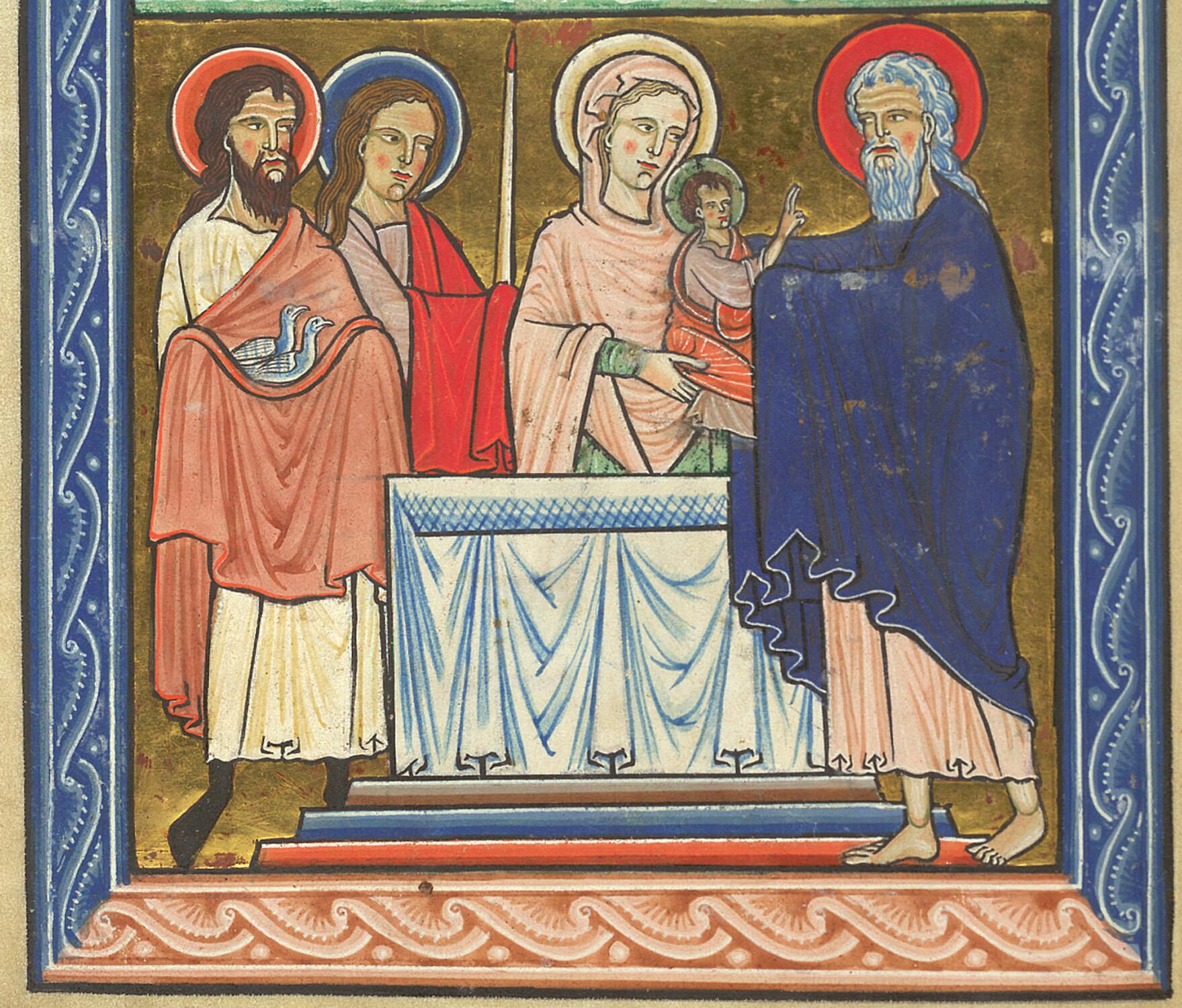 Simeon was living in expectation of seeing ‘the Lord’s Christ’, the Messiah, the ‘consolation of Israel’. In contrast to the politically focused hopes of so many Jews under the Roman occupation, the consolation Simeon desired: ‘was not the fulfillment of Jewish political hopes involving deliverance from their enemies and restoration of David’s throne but rather to the salvation Jesus brought.’ (New American Commentary, p. 115.) Simeon looked for to the sort of consolation Jesus pronounces in Luke 19:10: ‘Today salvation has come to this house, because this man, too, is a son of Abraham. For the Son of Man came to seek and to save what was lost.’ As the apostle Paul emphasised in his letter to the Christians in Rome, true salvation is a relationship with God embraced by faith and not earned by works. Moreover, this salvation surpasses the ethnic boundaries of descent from Abraham: ‘That is why it depends on faith, in order that the promise may rest on grace and be guaranteed to all his offspring - not only to the adherent of the law but also to the one who shares the faith of Abraham, who is the father of us all…’ (Romans 4:16) This salvation is ‘prepared in the presence of all peoples, a light for revelation to the Gentiles, and for glory to your people Israel.’ (Luke 2:31-32)

The Holy Spirit told Simeon that he wouldn’t die before seeing the Lord’s anointed, and moved by the Spirit he went to the Temple court just as Mary and Joseph arrived with the baby Jesus. Taking Jesus into his arms, Simeon praises God, blesses Joseph and Mary and gives Mary a word of knowledge.

Simeon can be understood to contrast one group of people, ‘that falls (humbles itself) and rises (is lifted up by God)’ (New American Commentary, p. 117.) with another group of people, who ‘speak against’ God’s signpost to salvation. Thus Simeon echoes Mary’s own hymn of praise earlier in Luke’s gospel, which speaks of how God ‘has scattered those who are proud in their inmost thoughts… but has lifted up the humble.’ (Luke 1:51-52)

Simeon says that by their response to Jesus the ‘thoughts from many hearts may be revealed.’ The Greek word translated here as ‘thoughts’ (dialogismoi) means antagonistic or evil thoughts. The use of this term continues Simeon’s presentation of Jesus as a sign that will be rejected. Again, the Greek word translated as ‘hearts’ (kardia) encompasses a person’s intellect as well as their emotions. In other words, as some people come to understand Jesus as God’s revelation so Jesus reveals their inner antagonism to God’s light. Some of these people may allow themselves to be brought low by the encounter, joining those humble souls who hunger for the good things of God’s kingdom (Luke 1:53). As Mary says, God’s mercy ‘extends to those who fear him’ (Luke 1:50)

Paul likewise holds out hope that although Jesus was a ‘stumbling stone’ to the Jews, Israel did not ‘stumble so as to fall beyond recovery’ (Romans 11:11):

‘Not at all! Rather, because of their transgression, salvation has come to the Gentiles to make Israel envious. But if their transgression means riches for the world, and their loss means riches for the Gentiles, how much greater riches will their full inclusion bring! … For God has consigned all to disobedience, that he may have mercy on all.’ (Romans 11:11-12 & 32)

In this light, what are we to make of Simeon’s parenthetical comment to Mary that ‘a sword will pierce through your own soul also’? Of course, ‘The most common interpretation is that it refers to the sorrow Mary would experience in seeing her son rejected and crucified.’ (New American Commentary, p. 117.) However, this comment likely alludes to ‘the fact that Mary would also stumble and experience difficulty in her son’s mission’ (New American Commentary, p. 117.), as recorded later in Luke’s gospel. Thus William C. Nicholas Jr. explains that ‘Family ties will not render [Mary] exempt from making a conscious choice to follow or reject Jesus’ teaching.’ (‘The Oracles of Simeon: Luke 2:28-35’) As Jesus says in Matthew 10:34: ‘I did not come to bring peace, but a sword.’

As would appear from the Marian perspective of the early chapters of Luke, and John’s record of the crucifixion, Mary chose to follow Jesus. Each of us faces the same choice on a daily basis, for as C.S. Lewis said: ‘The one thing Christianity can’t be is moderately important: either it’s untrue, in which case it’s of no importance at all, or it’s true, in which case it demands your whole life.’