The following quotation from agnostic New Testament scholar Bart Erhman has been brought to my attention as something 'doing the rounds' on sceptic websites etc: 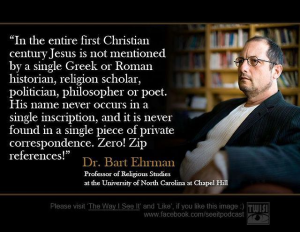 'In the entire first Christian century Jesus is not mentioned by a single Greek or Roman historian, religion scholar, politician, philosopher or poet. His name never occurs in a single inscription, and it is never found in a single piece of private correspondence. Zero! Zip references.'

As presented out of context on the above slide, this is a half-truth that makes Bart Erhman sound more extreme in his views about the historical Jesus than he actually is. For starters, Erhman accepts that 'whatever else one might want to say about Jesus, he certainly existed.' (cf. www.patheos.com/blogs/bibleandculture/2012/06/05/bart-ehrmans-on-did-jesus-exist-part-one/)

Listen to this clip from an atheist radio show in which Erhman discusses the historical Jesus with someone who doubts his existence:

Note that Erhman says: 'We have more evidence for Jesus than we have for almost anybody from his time period.'

Here's a more balanced quote from Erhman on the early sources for Jesus:

'To most modern people, it is surprising to learn just how little evidence there is for Jesus outside the Christian sources. He is not mentioned in any Roman (or Greek, or Syriac, or… whatever – any pagan [i.e., non-Jewish, non-Christian]) source of the entire first century. Never. That strikes people as surprising. He is mentioned a couple of times within about 80 years of his life by two Roman sources (Pliny and Tacitus; I’m not sure Suetonius can be used). And he is almost certainly referred to twice in the Jewish historian Josephus, once in an entire paragraph. But that’s it for the non-Christian sources for the first hundred years after his death. It’s not much. But it’s something, and since these are not sources that based their views on the Gospels (since these authors hadn’t read the Gospels), it shows that Jesus was indeed known to exist in pagan and Jewish circles within a century of his life. The really compelling evidence, though, comes in the Christian sources. Mythicists write these sources off because they are Christian and therefore biased, but that is not a historically solid way to proceed. Christian sources do indeed have to be treated gingerly, but they are sources every bit as much as pagan and Jewish sources are. What I show in Did Jesus Exist? is that there are so many Christian sources that can be used by historians that there is really no doubt at all that Jesus at least existed. Just to give an example (so as not to repeat my entire book here): by any credible dating, the apostle Paul must have converted to believe in Jesus within two or three years of the traditional date of Jesus’ death. And Paul knew some facts about Jesus’ life; he knew some of his teachings; he knew his closest disciple Peter; and he knew his brother James. Personally! If Jesus didn’t exist, you would think that his brother would know about it. The historian can not simply ignore what Paul has to say since he was a Christian. Taking his biases into account, we can use his letters for information about Jesus. And among other things, they show beyond a doubt that Jesus existed as a Jewish teacher in Palestine in the 20s CE. Otherwise we cannot explain Paul or his letters. That’s just one important piece of evidence for the existence of Jesus.' (my italics, cf. www.patheos.com/blogs/bibleandculture/2012/06/07/bart-ehrman-on-did-jesus-exist-part-three/)

Note that Josephus (37-97 AD) is a first century non-Christian historical source for Jesus, it's just that he isn't counted as a Greek or Roman source, which is all the quote we began with concerns itself with. However, Jospehus was granted Roman citizenship, so I don't see why he shouldn't be counted as a first century Roman source for Jesus. It's just that he's a Jewish Roman.

Again, here's what Ehrman says about non-Christian sources for Jesus within a hundred years of his crucifixion in his book The New Testament: A Historical Introduction to the Early Christian Writings (Oxford University Press):

'three pagan authors mention Jesus within one hundred years of his death. The first reference to Jesus in pagan literature is in a letter written by the governor Pliny to the emperor Trajan in 112 c.e. Pliny discusses the practices of the Christians in his province and, thus, gives us no information about the historical Jesus. The second (possible) reference to Jesus is by the historian Suetonius. Suetonius mentions a riot among Jews that was initiated by a man named “Chrestus.” Some scholars believe this is a misspelling of “Christ.” If, in fact, Suetonius is referring to Jesus, his narrative gives us information about later followers, not about Jesus himself. The only helpful information from pagan literature about Jesus’ life that dates within one hundred years of Jesus’ death is from another historian, Tacitus. Tacitus says that Pontius Pilate executed Jesus during the reign of Tiberius. Although not all of Tacitus’s information is correct (he says that Pilate was a procurator), he does corroborate information found in Christian sources. Looking beyond these three pagan sources, Jesus is mentioned twice in Josephus’s Antiquities of the Jews, a first-century Jewish text. One reference indicates that Jesus’ brother James was killed by the high priest Ananus. In the other reference, Josephus gives more information: he says that Jesus was a teacher and a “doer of startling deeds” who had Jewish and Gentile followers. Josephus continues, reporting that the Jewish leaders accused Jesus and Pilate condemned him to the cross. In this passage, Josephus also states that Jesus was the messiah. Because Josephus never converted to Christianity, and because his works were copied and transmitted by Christians, we can be relatively sure that this “confession” was a later Christian insertion.' (cf. www.oup.com/us/companion.websites/9780195322590/student_resources/chap14/?view=usa)

Unlike some sceptics, Erhman doesn't throw the baby out with the bath-water when it comes to the longer Jospehus passage about Jesus.

With this background in mind, I'd make the following observations in response to the specific out of context quotation with which we began:

First, considering that Paul (like Jospehus) was a Roman citizen, why don't his writings count as first century personal correspondence by a Roman that mentions Jesus? Even discounting Paul's Roman citizenship, he provides Jewish first century personal correspondence that mentions Jesus. Of course, Paul was a Roman Jewish Christian, but recall that Erhman himself rejects the double standard of automatically dismissing a source for Jesus on the grounds that it's written by a Christian. Moreover, Paul had been a persecutor of Christians who converted due to his own eyewitness encounter with the resurrected Jesus. I suppose a second hand report by some Roman who'd never even set foot in Israel would be considered more reliable as a historical source by certain 'sceptics'!

Second, what about the writings of a certain Greek doctor and sometime traveling companion of Paul called Luke?! Luke is a first century Greek historian! As Kenneth S. Wuest writes:

'LUKE WAS a Greek, educated in the Greek schools, prepared for the medical practice which was held in high regard as a profession... The Greeks were by nature and training, a race of creative thinkers who pursued their studies in a scientific manner. Their sense of what really constituted scientific accuracy and method in the recording of history was well developed. The writings of Luke, both his Gospel and The Acts, demonstrates Luke's training as an historian. He writes his Gospel to a Gentile friend, Theophilus. The name means "a god-lover," or "god-beloved," and may have been given him when he became a Christian. The words "most excellent" according to Ramsay, were a title like "Your Excellency," and show that he held office... Luke arranges the facts of [Jesus'] life in historical order as they occurred. The other Gospels do not claim to do that. The arrangement of events was dictated by the purpose which each author had in writing his account. The sources of Luke's information were oral and written, from eye-witnesses of the events recorded. He as a trained historian would carefully check over these accounts, investigating and verifying every fact. And this is what he has reference to when he uses the words "having had perfect understanding of all things from the very first." The words "having had perfect understanding" are literally, "having closely traced." The verb means "to follow along a thing in the mind." The word was used for the investigation of symptoms. Thus it speaks of a careful investigation of all sources, oral and written, which purport to be accounts of our Lord's life. Luke had the historian's mind, a thing native to the educated Greek... Sir William Ramsey said, "I regard Luke as the greatest historian who has ever lived, save only Thucydides." Thus we have no doubt but that Luke made a personal investigation of all the facts he had recorded.' (www.bible-history.com/quotes/kenneth_s_wuest_1.html)

To ignore first century Christian writings by the likes of Paul and Luke (i.e. the New Testament) would be like saying that one is going to ignore anything recorded by a Roman historian unless corroborated by a contemporaneous Christian writer! One can't just ignore evidence from Christian writers, and we have seen that  Erhman doesn't ignore such writings.

Third, one can't automatically discount evidence from non-Christian sources in the second century:

Fourth, one can't overlook Christian sources from the second century. People like Ignatius and Polycarp knew apostles such as Peter and John (cf. Chapter One of my book Understanding Jesus).

‘ancient secular sources mention various aspects of Jesus’ life, corroborating the picture presented by the Gospels. The writers of these sources include ancient historians such as Tacitus, Suetonius, and Thallus. Jewish sources such as Josephus and the Talmud add to our knowledge. Government officials such as Pliny the Younger and even Roman Caesars Trajan and Hadrian describe early Christian beliefs and practices. Greek historian and satirist Lucian and Syrian Mara Bar-Serapion provide other details . . . at least seventeen non-Christian writings record more than fifty details concerning the life, teachings, death, and resurrection of Jesus, plus details concerning the earliest church… Dated approximately 20 to 150 years after Jesus’ death, these secular sources are quite early by the standards of ancient historiography.’

Finally, Dr Stefan Gustavsson points out that the in the surviving works of ancient historians Jesus is mentioned as early as he could possibly be mentioned (see especially from c. 2:30 onwards):

Is the New Atheism Credible?

I scripted, directed, produced and was interviewed for this video from the Damaris Trust in 2009, but it has only just been released on You Tube. The video features interviews with Gary R. Habermas and Alister McGrath.