www.bethinking.org have published my paper 'Understanding the Trinity', which defends this key Christian belief against the charge of incoherence and gives both a posteriori and a priori arguments for its truth.

The Sixth Borough: The search for hope in Extremely Loud and Incredibly Close

The Sixth Borough is my first (co-authored) e-book, looking at the philosophical ideas behind Jonathan Safran Foer’s novel Extremely Loud and Incredibly Close (now a major Hollywood film starring Sandra Bullock and Tom Hanks), which explores one boy’s search for meaning after the death of his father in the Twin Towers attacks. Short enough to read in one sitting, deep enough to provoke further thought, this min-eBook from Damaris is the perfect stimulus for anyone sharing in Oskar’s search for hope. 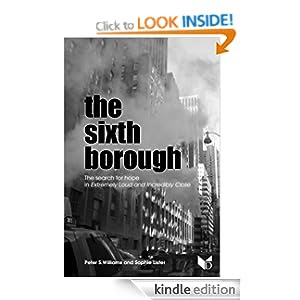 Amendments to the text of Understanding Jesus: Three Ways to Spiritual Enlightenment (Paternoster, 2011)

Technical Mistakes:
1) A correction actually made during the copy-editing process, but which somehow re-appeared in the printed book, is a mathematical mistake on page 39: Thinking the 'first way' raises the probability of the Christian understanding of Jesus by 0.05 on the scale does not translate into soaking up "5%" of one's pool of initial scepticism if pegged to 0.1 on the scale. In the copy-edited proofs I changed this to drop the percentage and simply read 'a small proportion', and this change even appeared in the free first chapter as distributed by ELF (Read Chapter One of Understanding Jesus), but didn't make it into the published work!
2) On page 268 I list an additional analogy between religious experience and sense experience. Having already given nine analogies this should of course be listed as a tenth point of analogy. Unfortunately it says "ninth"!
A Substantive Correction:
According to http://theosophical.wordpress.com/2012/01/17/modern-myth-all-but-11-verses-of-the-nt-could-be-constructed-from-the-writings-of-the-early-church-fathers/ the claim that all but eleven verses of the NT are quoted by the early church fathers, a claim I've read in many places and which I replicated in good faith (with a citation) on page 80 of Understanding Jesus, is a myth. If so, I should perhaps simply have said on page 80 that 'Many verses of the NT are preserved in quotations used by the early church fathers of the first to fourth centuries...' and that the 36,000 NT quotations, referenced by Dr Ralph O Muncaster, actually comprise c. 46% of the NT. The basic point, that the already massive MS authority of the NT is re-enforced by quotations in the works of the early church fathers, still stands.
# posted by Peter S. Williams @ 2:23 pm