Exoplanets are in the news recently, often being massively over-hyped in the popular press as 'new earth-like planets' that could harbour life. However:

According to The Telegraph: 'Astronomers have found a pair of Earth-sized planets orbiting a star similar to the Sun, though neither are believed to be suitable for life... Kepler-22b has the right temperature, but it is too big. (The planets) we're announcing today are just the right size, but too hot," astronomer David Charbonneau with Harvard University, told reporters...' (my italics)

Space.com explains: 'The two Earth-size planets are among five alien worlds orbiting a star called Kepler-20 that is of the same class (G-type) as our sun, and is slightly cooler. Two of the star system's planets, Kepler-20e and Kepler-20f, are 0.87 times and 1.03 times the width of Earth, respectively, making them the smallest exoplanets yet known. They also appear to be rocky, and have masses less than 1.7 and 3 times Earth's mass, respectively. Scientists think that they are composed mainly of silicates and iron, much like the Earth, [so far so good, several habitability criteria are probably met by these planets] though they lack our planet's atmsophere [whoops]. Kepler-20e makes a circle around its star once every 6.1 days at a distance of 4.7 million miles (7.6 million kilometers) — almost 20 times closer than Earth, which orbits the sun at around 93 million miles (150 million km). The planet's sibling, Kepler-20f, makes a full orbit every 19.6 days, at a distance of 10.3 million miles (16.6 million km). Both planets circle closer to their star than Mercury does to the sun. These snuggly orbits around their star give the newfound planets steamy temperatures of about 1,400 degrees Fahrenheit (760 degrees Celsius) and 800 degrees Fahrenheit (430 degrees Celsius) — way too warm to support liquid water, and probably life, researchers said [double whoops]. Fressin said the chance of life on either of these planets is "negligible," though the researchers can't exclude the possibility that they used to be habitable in the past, when they might have been farther from their star. There is also a slim chance that there are habitable regions on the planets in spots between their day and night sides (the planets orbit with one half constantly facing their star and the other half always in dark). But astronomers aren't holding out hope. "The chances of liquid water and life as we know it on Kepler-20e and f are zero," Laughlin said.' (my italics)

Boston Globe Reports: 'A team led by Harvard astronomers announced yesterday a major milestone in the long-running hunt for worlds capable of supporting life elsewhere in the cosmos: the detection of a planet the size of Earth. The rocky planet, and another they found that is a bit smaller than Earth, are the smallest ever discovered orbiting another star. They provide the powerful proof astronomers have been waiting for that it is possible - using a space-based telescope - to detect planets that fit the profile that has successfully spawned life in our own solar system. Astronomers are still far from the ultimate dream of finding an inhabited world; these so-called exoplanets sit scorchingly close to their sun and would be too hot for life, at least as we know it. But just weeks ago, scientists reported the discovery of a planet that is bigger than Earth, but otherwise just right - sitting squarely in the “Goldilocks zone’’ that is not too hot and not too cold for liquid water. Together, the discoveries signal that that their search techniques are ready to pinpoint the right planets - if they are out there to be found.' (my italics)


These two planets, which are probably 2-3 times the mass of Earth respectively (cf. www.foxnews.com/scitech/2011/12/20/could-there-be-life-on-new-earth-size-kepler-planets/) are tidally locked (i.e they always keep one face towards their sun). Moreover, this solar system has rocky planets and gas planets interspersed with each other, unlike our own solar system which has gas giants on the outside providing a 'gravitationoal shield' that attracts dangerous space debris: 'In our solar system, small, rocky worlds orbit close to the sun and large, gaseous worlds orbit farther out. In comparison, the planets of Kepler-20 are organized in alternating size: large, small, large, small and large.' - www.nasa.gov/mission_pages/kepler/news/kepler-20-system.html

The BBC notes: 'Both planets are now thought to be too hot to be capable of supporting life. But according to Dr Fressin, the planets were once further from their star and cool enough for liquid water to exist on their surface, which is a necessary condition for life.' (my italics)

But a necessary condition is not a sufficient condition; and even that is dependent upon whether or not there is H2O there, what atmosphere it once had, whether or not it has a magnetic field to shield itself from solar rays, etc. As Discovery News reports: 'The first two Earth-like worlds orbiting another star have been detected, although neither are believed to be suitable for life. But if the planets had water in the past, there's a good chance they could have hung on to it long enough for life to take hold, Linda Elkins-Tanton, with the Carnegie Institution in Washington DC, told reporters on a conference call Tuesday.' (my italics) Those 'if's', guestimated 'chances' and 'could's' are important conditional statements!

On the question of the sufficient conditions for the origin of life on a planet capable of sustaining its existence cf:

David Klinghoffer (ed.), Signature of a Controversy: Response to Critics of Signature in the Cell (Discovery Institute, 2011)

Stuart W. Pullen, Intelligent Design or Evolution: Why the Origin of Life and the Evolution of Molecular Knowledge Imply Design (ID Books, 2005)


On the criteria for a planet able to sustain life cf:

Guillermo Gonzalez & Jay Richards, The Privileged Planet: How Our Place in the Cosmos Is Designed for Discovery (Regnery, 2004)


Here's some podcasts from Old Earth Creationist organization Reasons to Believe on SETI and the Kepler discoveries:

'Another Super-Earth in the habitable zone?' Play Episode Download Episode 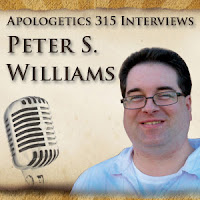 Today's interview is with Peter S. Williams (blog here). He talks about his recent projects, including his debate alongside William Lane Craig at Cambridge, and his recent book: Understanding Jesus: Five Ways to Spiritual Enlightenment. He discusses a cumulative case approach, the Gospels as testimony and the role of testimony, the historical sources for Jesus, Jesus' self-centered teaching, the trilemma argument, Jesus' miracles, non-Christian miracle claims, the argument from prophecy and common objections, religious experiences, Jesus' spirituality, and more. More resources by Peter S. Williams here.

First the data on the recently discovered planet 'Kepler 22-b':
"To date, its mass and surface composition remain unknown. If it has an Earth-like density (5.515 g/cm3) then it would mass 13.8 (2.43) Earths while its surface gravity would be 2.4 times Earth's. If it has water like density (1 g/cm3) then it would mass 2.5 (13.8/5.5) Earths and have a surface gravity of 0.43 (2.5/2.42) Earth's. The distance from Kepler-22b to its star is about 15% less than the distance from Earth to the Sun. Its orbit is about 85% as large as Earth's orbit. One orbital revolution around its star takes 289.9 days. The light output of Kepler-22b's star is about 25% less than that of the Sun. The combination of a shorter distance from the star and a lower light output are consistent with a moderate surface temperature. Scientists estimate that in the absence of atmosphere, the equilibrium temperature would be approximately -11°C. If the greenhouse effect caused by the atmosphere is Earthlike, this corresponds to approximately 22 °C (72°F) average surface temperature." - Wikipedia (my italics)
""This is a major milestone on the road to finding Earth's twin," said Douglas Hudgins, Kepler program scientist at Nasa headquarters in Washington." - www.guardian.co.uk/science/2011/dec/05/exoplanet-kepler-22-b-nasa-earth (my italics)
So, not Earth's twin then, as one might think from the media hype.
"In another step towards finding Earth-like planets that may hold life, NASA said on Monday that the Kepler space telescope had confirmed its first-ever planet in a habitable zone outside our solar system... Kepler-22b is 2.4 times the size of the Earth, putting it in a class known as "super-Earths", and orbits its sun-like star every 290 days. Its near-surface temperature is presumed to be about 22 degrees Celsius. Scientists do not know, however, whether the planet is rocky, gaseous or liquid." - www.smh.com.au/technology/sci-tech/nasa-confirms-superearth-that-could-hold-life-20111206-1ofx3.html (my italics)
"The planet itself is 2.4 times the size of Earth, but that’s about all that is known about Kepler-22b. Its mass/composition is unclear at this point, meaning it could be a “global ocean” or entirely rocky." - www.dailytech.com
So, its not an Earth-like planet that may hold life, but a step on the way to finding such. We do not know if it is a chunk of rock, or a ball of gas or a liquid ocean.
"The only trouble is the planet’s a bit big for life to exist on the surface. The planet is about 2.4 times the size of Earth. It could be more like the gas-and-liquid Neptune with only a rocky core and mostly ocean... Because its size implies that it’s closer to Neptune in composition than Earth, “I would bet my telescope that there is no hard, rocky surface to walk on”..." - www.washingtonpost.com/politics/a-new-earth-nasa-finds-planet-outside-solar-system-at-comfy-72-degrees-with-sunlike-star/2011/12/05/gIQA3Z0fWO_story.html?tid=pm_pop (my italics)
‘Kepler's scientists said they've confirmed the existence of their first exoplanet solidly within the habitable zone of its solar system, where water could exist in liquid form at a pleasant 72 degrees Fahrenheit (22 degrees Celsius). That certainly sounds livable, but Mendez told me that the planet, known as Kepler-22b, doesn't quite fit into the sweet spot for habitability because it's closer in size to Neptune than to Earth. "I confirmed its radius, and Kepler-22b is a low-end Warm Neptunian, very close to a Superterran," Mendez said in a Twitter back-and-forth from NASA's Ames Research Center in California, where he was presenting his research at the Kepler Science Conference. Neptunians are likely to have a gaseous rather than a rocky composition, which might make it tough for life as we know it on Kepler-22b.’ – ‘Alien Planets get Pidgeonholed’, Alan Boyle http://cosmiclog.msnbc.msn.com/_news/2011/12/05/9233790-alien-planets-get-pigeonholed (my italics)
In sum: Kepler 22-b is 'a bit big for life to exist on the surface', if it even has a solid surface! Moreover, we don't know whether or not Kepler 22-b has water, although if it does have water then it would be liquid (because it's in the goldilocks zone around its star). However, even if there is water on Kepler 22-b, water is a necessary but not a sufficient condition for life. Kepler 22-b is probably more like Neptune than Earth. Neptune isn't well known for its wildlife.
# posted by Peter S. Williams @ 8:03 am

My book Understanding Jesus: Five Ways to Spiritual Enlightenment (Paternoster, 2011) has now been published (I actually held a copy in my hand today), although it may take a little while to become available outside the UK.

The book carries a couple of nice endorsements:

'Peter Williams gives five powerful reasons for thinking that God revealed himself in Jesus Christ... If you think there just might be something in Christianity, you need to read this book.' - Angus J.L. Menuge, Professor of Philosophy, Concordia University

'Williams gathers diverse strands of apologetic argument to present them afresh in contemporary context. With an eye to the alternatives, he drives his cumulative case home with intellectual verve. This book is a challenge to disbelief, and encourages renewed confidence in understanding the reality of Jesus today.' - Anna Robbins, Vice Principle and Senior Lecturer in Theology and Contemporary Culture, London School of Theology.

It would, of course, make an excellent Christmas present! Order On-Line: